Welcome back! So we learnt a couple of stuffed dishes so far...One stuffed bread that I like to eat very often is the stuffed spinach roll at the cafe's. The bread in particular is a soft regular sandwich bread that has been turned out into a wrap. There is a very thin layer of crust that is formed around the bread very much like toasted bread. When you smear it with some butter while it is still hot, it tastes divine. The filling can ofcourse be of your choice but I prefer to fill mine with spinach base. Sometimes I add corn , carrots, boiled potato or paneer to it. It tastes good with any combination.

So fire up your ovens and try this easy deli roll and let me know how it works for you... 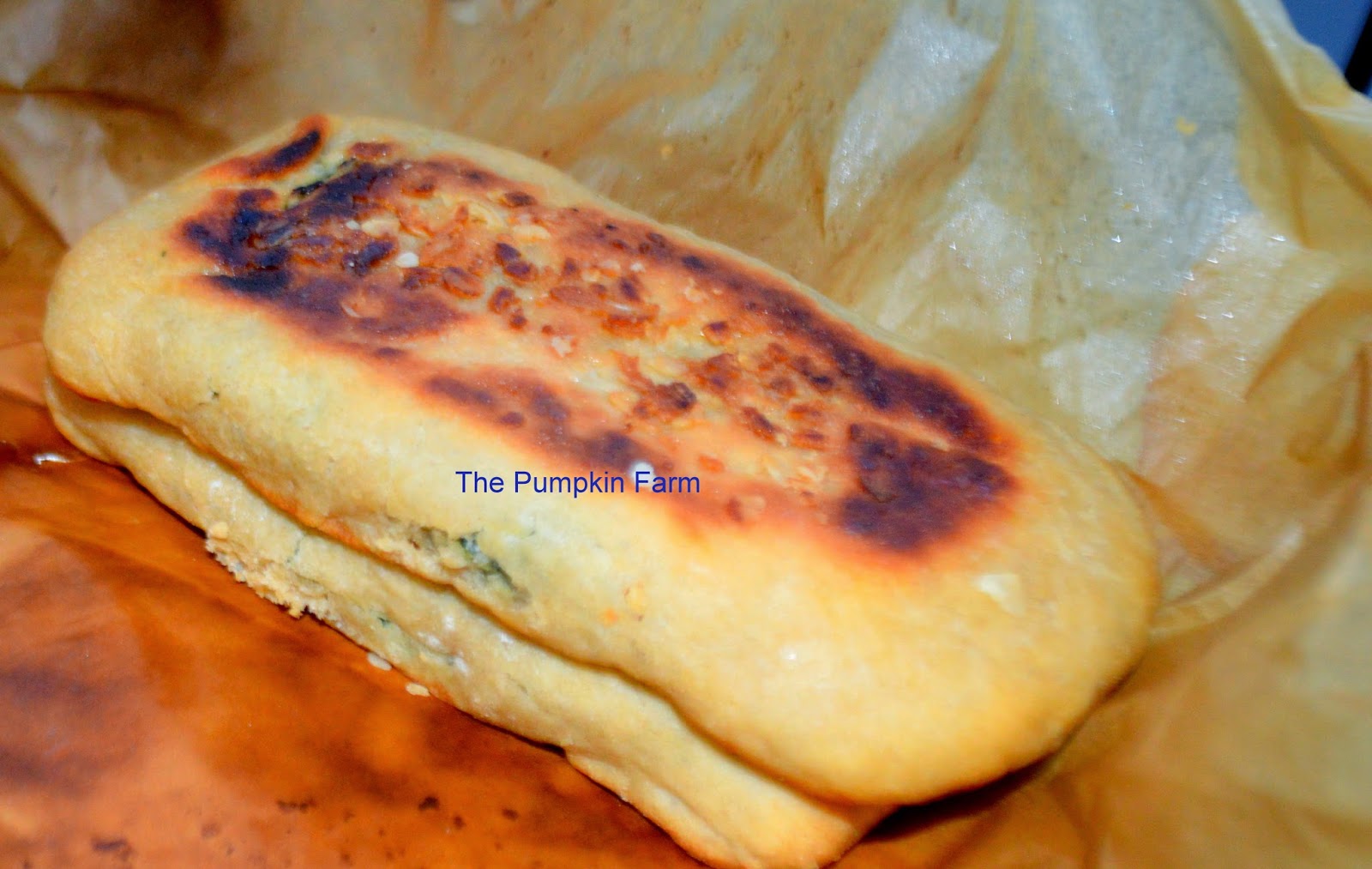 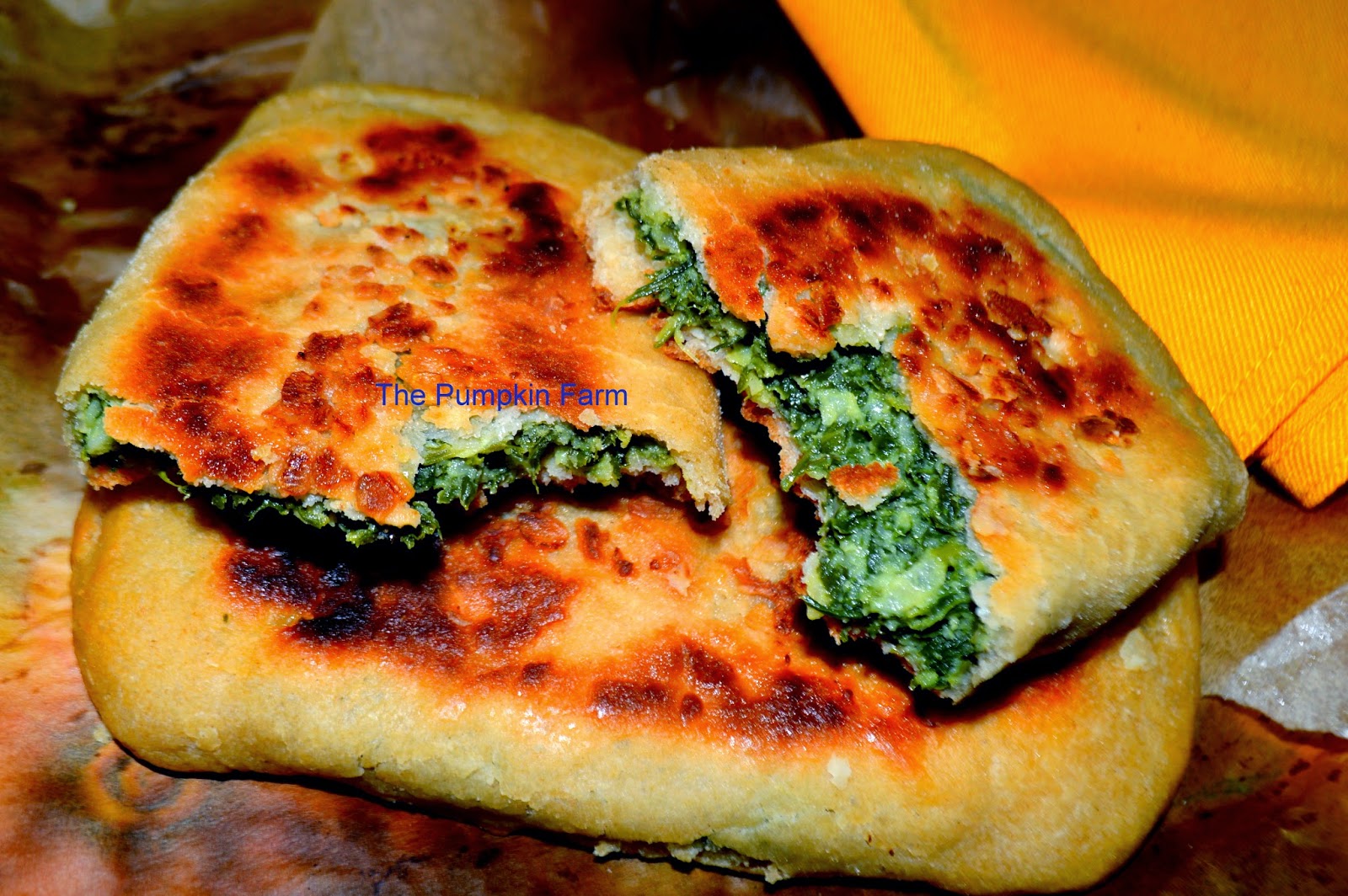 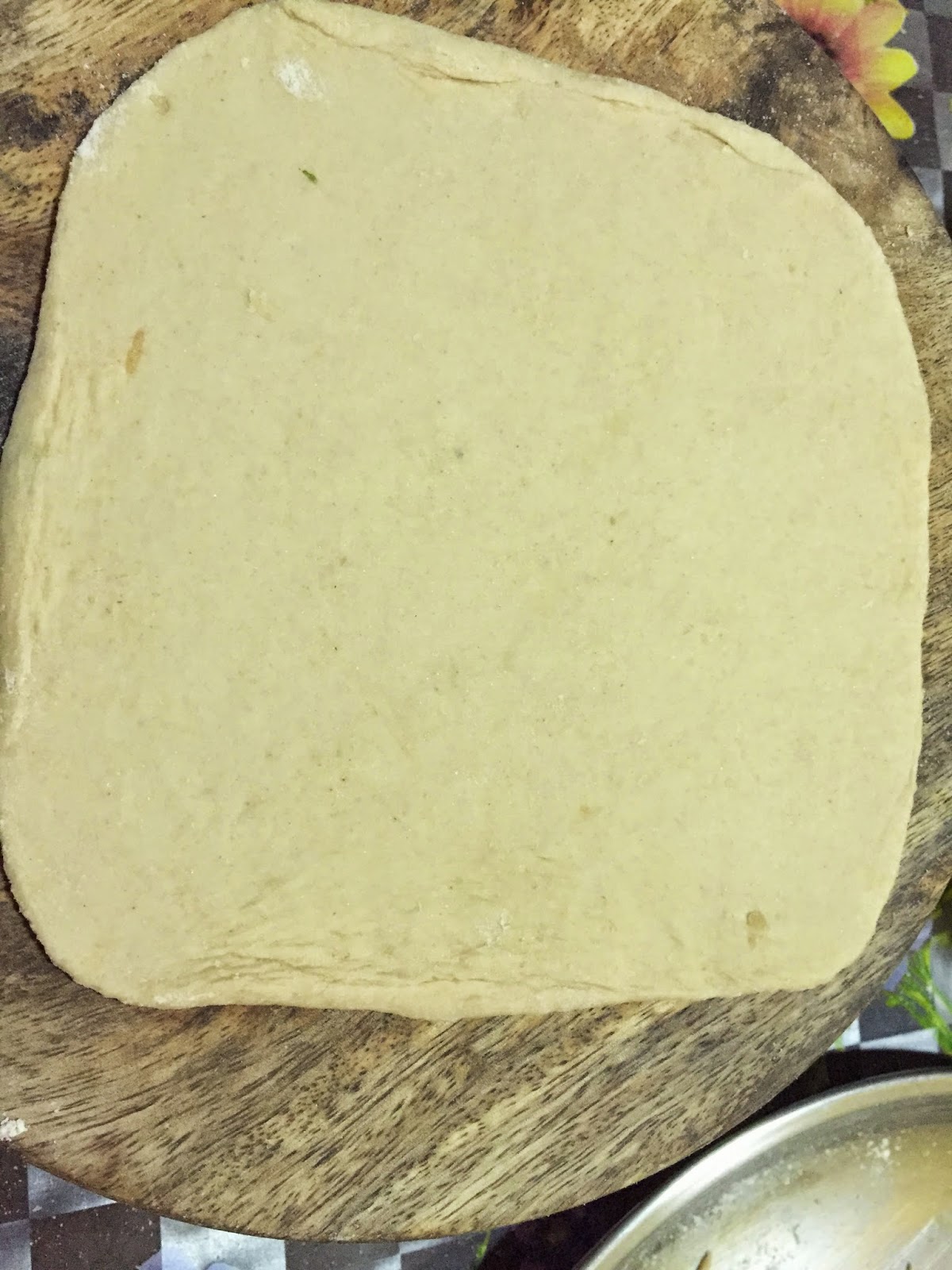 4) Next add the cornflour mixed with milk and saute until it starts thickening. Now add the cream cheese , season with salt and pepper (be generous with pepper)
5) Remove when it is just about thick and not runny
6) In a large bowl, mix all the bread ingredients and knead it until you get a soft dough. Cover and set aside until it rises and becomes double
7) After it doubles, make 2 balls for 2 large deli rolls or 4 balls for small size rolls.
8) Roll out each into a flat rectangle about 6 to 8 inch wide. and 1/2 inch in thickness.
9) Place the cooled down filling in the centre spreading it out evenly till almost the edge lenthwise.
10) Fold over from both sides and seal it. Turn over to place the seam side facing down.
11) Cover with cling wrap or kitchen towel and let it rest for second rise - about 30-40 min. 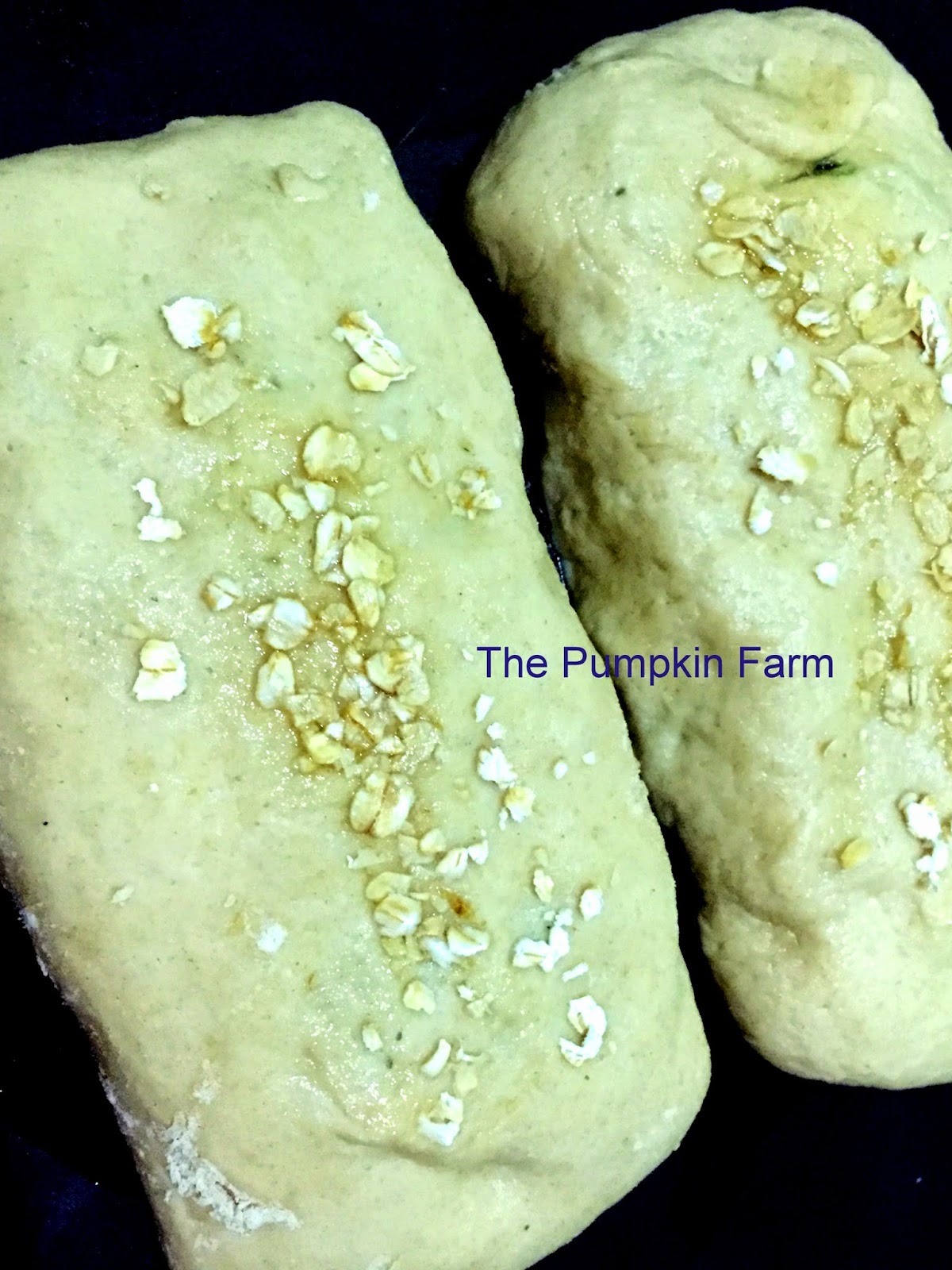 12) Preheat the oven at 200c for 10 min.
13) When the rolls are double in size, brush them with some oil and then honey and sprinkle oats on top. Press the oats with the help of back of the spoon.
14) Place them on greased plates and bake for 10-12 min or until the top turns brown. We need soft bread with lightly toasted texture on outside.

When done, wrap in in foil and carry for a
quick bite on the go 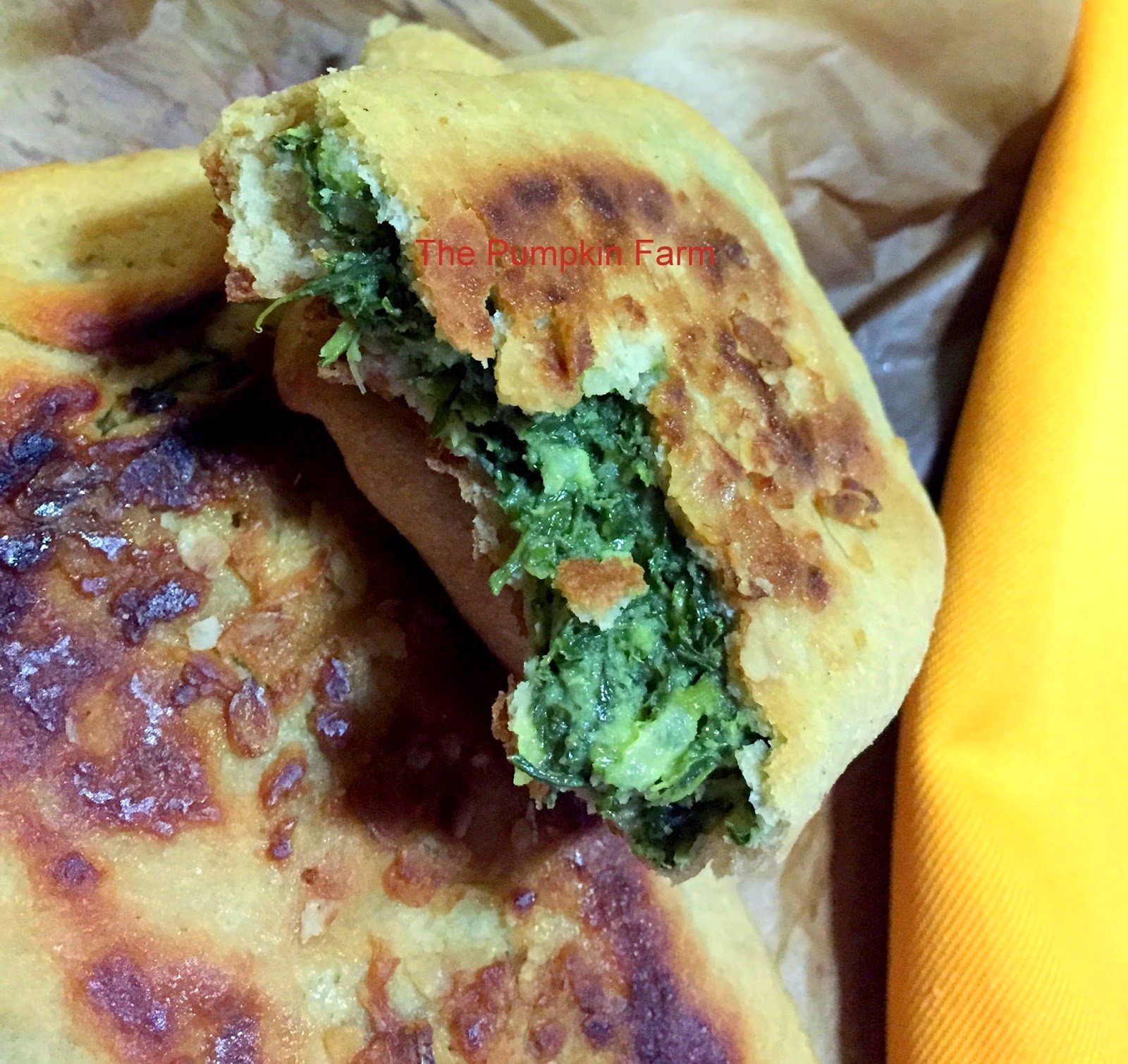 Suma Gandlur said…
Love the stuff that went in as the filling and those are some healthy version rolls.
11 April 2015 at 01:18

Priya Srinivasan - I Camp in My Kitchen said…
Oh yum that filling, i m totally loving this rolls. Makes a complete meal with just a condiment by side and some drink to wash it down!!
11 April 2015 at 23:27

Varada's Kitchen said…
I love stuffed breads. I like the stuffing in this one- like you said any combo will taste great as a filling. Love the crispy thin crust.
12 April 2015 at 02:19

Unknown said…
Delicious stuffing and a perfect green color... It is screaming healthy
12 April 2015 at 21:26

vaishali sabnani said…
Ah this reminds me of my MIL ! She used to make a Paratha in the similar manner... Perfectly done and a very tempting bake.
13 April 2015 at 06:03

Nalini's Kitchen said…
The stuffing sounds healthy and inviting..must be a filling and delicious one..
13 April 2015 at 23:33

Srividhya said…
This spinach and cheese compliment each other very well. cream rolls.
14 April 2015 at 21:33

Rajani S said…
I really am learning a lot of innovative bakes this time. I am so tuned to cakes . The only alternative is cookies. Its time to break out the mold and try new recipes like this one :-). Bookmark list grows again!
14 April 2015 at 22:37

Kalyani said…
Thot I commented on this ..

Sandhya Ramakrishnan said…
Such a lovely stuffed bread! Makes it so easy to pack when traveling.
20 April 2015 at 08:48

Pavani said…
What a tempting looking stuffed bread. Love the click with the spinach peeking through -- too good.
21 April 2015 at 02:51

Archana said…
Wow what tempting an delicious bread. The filling is a great way to sneak in spinach.
26 April 2015 at 17:39