I visited tokyo twice in 10 days for a total duration of 4.5 days. If you guessed it..I was in transit. Back in 2003 there was the SAARS flu scare. I had to visit Sydney for some work but my family put the foot down on me flying via SAARS affected nations which was most of the South Asian connecting airports that I would have had to take.

My travel coordinator then booked me on JAL , with 4.5 days in Tokyo both ways to find a connecting flight to Sydney. The Japan Airlines. I had a strange connection having JAL hotel in my neighbourhood

Coming back to the experience in Tokyo since I had nothing to do for the 2 days each time I spent while travelling back and forth I did a lot of strolling around the city, saw a few places shopped for some food items which seemed unusual  the sushi thing was not that big back then. So seeing see weeds floating in soups made me feel a little eery. However the bakeries fascinated me even though that is not what they are famous for I found many bakeries on the streets which seemed like assembly line productions. There were sections for kneading, baking , filling, packing nothing meddled into each other.

I survived on chicken in ginger sauce and teriyaki chicken for those 5 days due to lack of awareness on food items and based on warnings given by friends about tofu stinks. I hope to relive this experience with friends and families again but until then keeping up on the blogging marathon theme for myself to cover the countries I have personally visited, Japan had to be on the list. 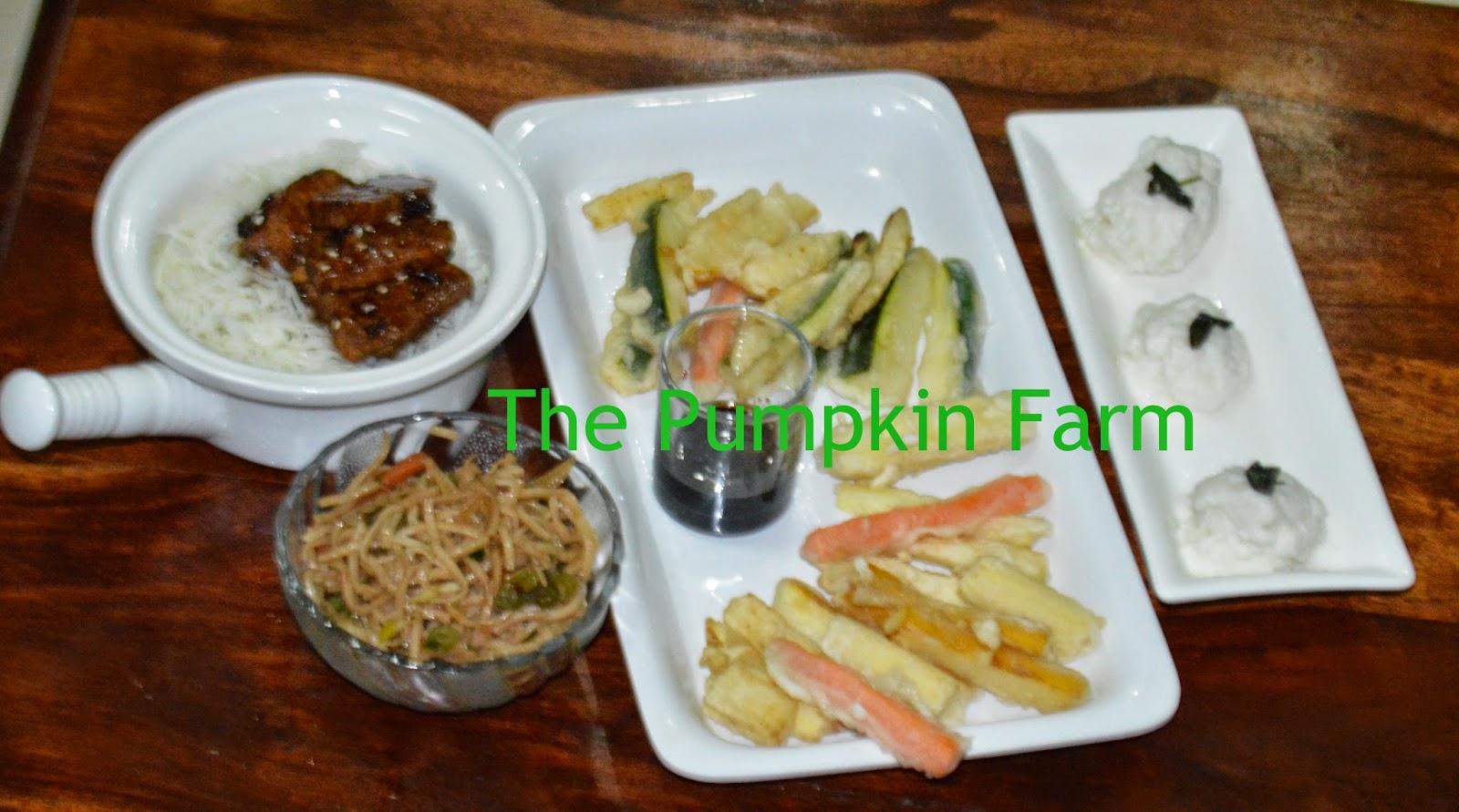 I put together a meal with Tempura as starters , followed by Paneer Teriyaki with white rice, Soba Noodles in ginger sauce and Green Tea Icecream

Varada's Kitchen said…
You have put together another spectacular meal. Love all the effort you have taken. Looking forward to the rest
11 September 2014 at 09:22

Srivalli said…
Pradnya, you really seem to have had such experience traveling to each of these countries..very nice to read and know..that's a great looking platter you got there..
11 September 2014 at 10:51

Priya Suresh said…
That paneer teriyaki is alluring, cant resist to those soba noodles, wat a wonderful way to finish this meal with green tea icecream.
11 September 2014 at 11:52

cookingwithsapana said…
Another wonderful spread of delicious and tempting dishes you have presented there.
11 September 2014 at 14:26

vaishali sabnani said…
Ah a meal from Japan.veg food is a problem but non veg is easy..but language is the biggest barrier. .so thank your stars you got something to survive on.
11 September 2014 at 15:53

Usha said…
Visited Dubai twice as you did Japan. I had about 18 hours halt and visited the city. You put together a wonderful Japanese meal.
12 September 2014 at 01:31

Usha said…
Don't know if my last comment got posted. It gave me an error.

Unknown said…
Another fabulous spread pradnya :)I don't get tired to appreciate about your efforts , this meal platter is simply calling me :) paneer teriyaki is simply a wonderful idea of making the dish veg :) Green tea ice cream is just mind blowing :)
12 September 2014 at 19:08

Harini R said…
Your travel stories are quite interesting. That is quite a meal you put together!
15 September 2014 at 06:03

Chef Mireille said…
you cooked a bunch of my faves from Japanese cuisine
23 September 2014 at 04:56

Suma Gandlur said…
That's a wonderful meal put together. I had tried once to prepare tempura the authentic way and failed miserably. :) And that ice cream flavor is interesting.
30 October 2014 at 01:54