Blogging marathon kicks off a month long feat of bringing the best of 28 states and a couple of union territories. The first state is a neighbour.
Andhra Pradesh for me is predominantly Hyderabad where I spent a few months in 1999/2000. Andhra also shares border with maharashtra which means there is a lot of influence on the culture both ways.
This state forms part of the 4 major states from south India. It still stands out distinctively in terms of food from other states with the influence of moghul culture which enjoyed its rule for the longest period. Even the bylanes of hyderabad and secunderabad have the traces of the glorious past albeit most of it in shambles now. But if you appreciate cultural influence you will enjoy a trip to the nizam's den. And once there you need to taste a few things without fail, Tamarind Rice , Puliyogare rice, Pesarattu and the Hyderabadi Biryani. And when you speak about biryani the most popular accompaniment to go along with it is the Mirchi ka Salan. A deliciously flavored spicy and tangy gravy preparation that compliments the biryani perfectly. 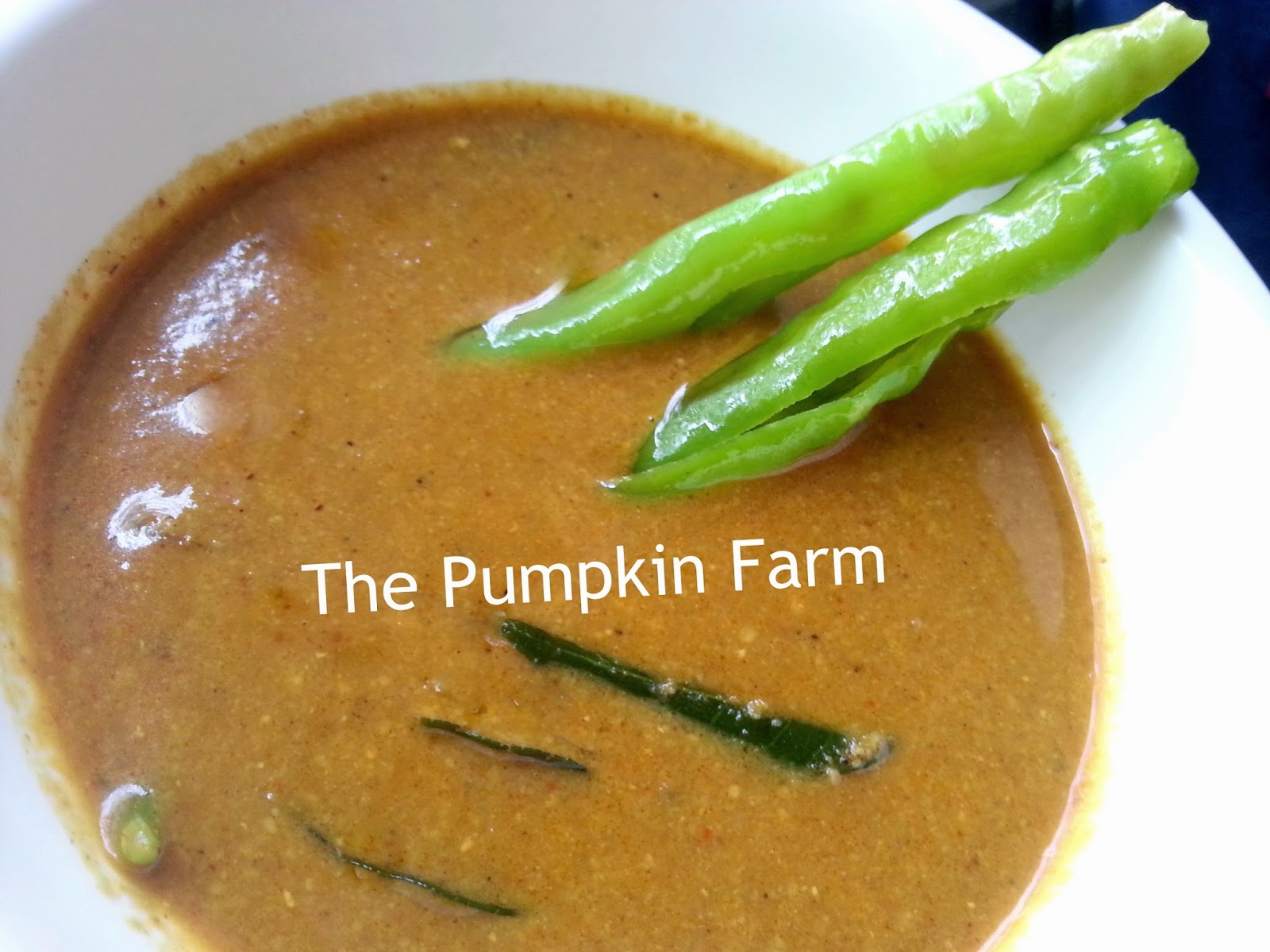 Method
1) In a non stick pan, roast the coconut, peanuts and sesame seeds , individually
2) Grind them using little water to a smooth paste
3) In a pan heat oil.
4) Slit the green chillies in the centre vertically and deseed them. Deep fry them until there are blisters on the skin
5) Remove the chillies and set them aside
6) Add the sliced onions to the hot oil.
7) Next add red chilli powder, turmeric, garam masala and saute till the onions are cooked and start caramelizing
8) Add the coconut paste and stir well
9) Add the garam masala and salt and some water to make curry like consistency.
10) After 5-8 min add the curd. Cover the curry with a lid and let it simmer for 20 min or until the color of the curry changes to dark and oil separates and floats on the top
11) Add the tamarind pulp and stir well. Cover for 2 more min
12) Serve hot alongside biryani or roti , topped with the green chillies.
Email Post
Labels: Andhra Gravy South Indian

Sandhya Ramakrishnan said…
Love the mirchi ka salan gravy! Such a special dish from Hyderabad. Looking forward to reading all your recipes for the month :)
1 April 2014 at 08:45

Usha said…
Another mirchi ka salan recipe ! Love it with biryani. You are right about neighboring states having influence on the cuisine. Even I noticed how some the food is similar to Maharashtrian cuisine.
1 April 2014 at 09:25

Unknown said…
wow such an irresistible mirchi ka salan :) looks very delicious and am so looking forward to your rest of the states :)
1 April 2014 at 11:27

vaishali sabnani said…
Wow the mirch ka Salan is a lovely dish and very inviting one too. A good kick to begin the marathon with a nice Mirch, instead of sweet.:))
1 April 2014 at 11:58

Priya Suresh said…
This is one of the most cooked and trademark dish of Hyderabadi cuisine, trust me i also planned to make them for this Mega marathon, u guys are tempting me now.
1 April 2014 at 12:54

cookingwithsapana said…
Same pinch ! I love this Hyderabadi delicacy and yours looks fabulous !
1 April 2014 at 13:27

Priya Srinivasan - I Camp in My Kitchen said…
Sesame, coconut and peanuts plays a great role in many of the hyderabadi dishes i believe, i was a bit hesitant to try this, thinking would be very spicy!!! Looks very tempting!!
1 April 2014 at 14:17

Rajani S said…
what a great combination of peanut and coconut! It looks really yum, Pradnya...I am just closing my eyes and thinking of the flavour bursts there in that salan....yumm!
1 April 2014 at 15:07

jayanthi said…
cannot agree more. Mirchi ka salan is the perfect side to biryani. Yours looks delicious
1 April 2014 at 16:05

Padmajha said…
I wanted to make this to go with the briyani but couldn't manage everything together. Must try this sometime. Looking forward to your other dishes this month :)
1 April 2014 at 17:13

Chef Mireille said…
this seems to be a popular one I will have to add to my Hyderabadi trials
1 April 2014 at 18:10

Varada's Kitchen said…
The salan looks great. Enjoyed reading what you took back from you stay there.
1 April 2014 at 20:10

Pavani said…
Love that spicy and yummy Hyderabadi mirchi ka salan. Looking forward to your posts this month.
1 April 2014 at 20:54

Nalini's Kitchen said…
Another mirchi ka salan,looks so tempting and flavorful..
2 April 2014 at 00:33