Baking bread rolls is not a very good idea especially if you have a palette which is trained to dig into an oily crust and then hit something soft inside. The canteen bread rolls which is a popular snack in all schools and colleges will have that sort of texture.

The one I am about to make is the baked version which I promise is full of taste but do not approach it with the any prejudice as my version simply shares the name with the one you are used to.
I did consider naming it something different but then dropped it for lack of creativity. 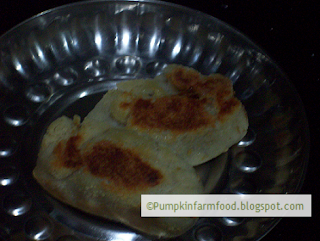 Method
1)      In bowl mix together all the ingredients except the bread and oil.
2)      Take one slice of bread and dip it in water, and then take it on your palms quickly squeezing out the excess water. Don’t worry if the bread deforms as you can cover it by maneuvering your palms to form a cover later on.
3)      Put the filling in the centre and try covering it from all sides. Move your fingers such that the open sides are over each other and press gently towards the corners.
4) Make some more.
5) Line a baking sheet, with some butter or parchment paper

6) Preheat your oven for 5 min at 180 degrees.
7) Place the bread rolls on the tray and tip it in the oven for 15 min. Turn them after 8-10 min. Brush with some oil if they are taking longer to change color.
8) Serve with ketchup or chutney.