I do not have any special recipe for my alu wadi. However, I have mastered a technique to make nice and simple aluwadis which is why we make it quiet often at home. Also, keeping up my promise for posting some typical maharashtrian snacks.
I must tell you though that I usually make the aluwadis for special occasions such Ganesh chaturthi. Other days it is my ever smiling cook who does the job for me.
Now that shravan is round the corner I am expecting a lot of it to be made in the coming days. 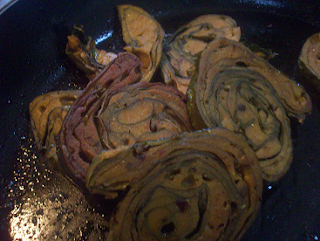 Method
1)      Make a paste of all the ingredients except the colacasia leaves with little water. The consistency of the batter should be paste like which can be easily spread on the leaves.
2)      Now take the leaves, chop off the stems and flatten the leaves using a rolling pin. This will crush the veins on the leaves and allow better rolling later on.
3)      Now Place the leaves the larger side towards you on a flat surface. Now start applying the gram flour paste. Do not make a thick layer but also don’t make a very thin layer
4)      Place another leave on top now with the smaller side towards you. Repeat alternately until yu have 3-4 layers.
5)      Now to roll the leaves, start by bring in the extra surfaces inside so that you have a well closed roll at the end.
6)      Start rolling in the leave tightly but do the process very gently.
7)      Seal the open ends by stuffing the leaves inwards.
8)      Steam the roll using boiling water for 15-20 minutes. The gram paste should be fully cooked. 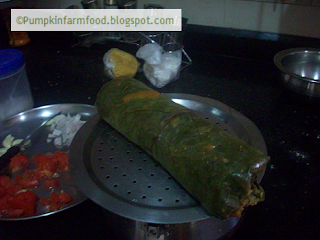 9)      Remove the rolls and let it cool. Cut pin wheels using a knife about ½ inch in width.
10)  Deep fry the wadis until they are crisp and brown. You can also eat it directly without deep frying but shallow frying and tempering with sesame seeds.
Yummy and easy. I usually make them upto step 8 couple of days ahead of time and then stash them in the refrigerator. Fry them as you go.